The Most Pleasing Prayer to the Blessed Virgin Mary 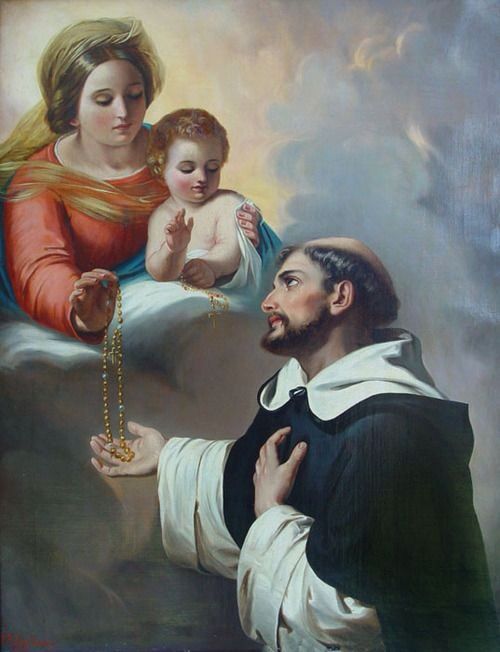 Saint Dominic de Guzman (1170-1221) was anguished by the evils then plaguing Spain. Pope Innocent III had asked him to combat the Albigensians, a heretical sect that preached an exaggerated asceticism, denied the priesthood, and opposed the veneration of saints.

While St. Dominic was at prayer, the Queen of Angels appeared to him and said: “Dominic, preach the angelic psalter.” The Blessed Virgin was referring to the Holy Rosary, a collection of one hundred fifty Hail Mary’s recited in honor of our Lady. Since they are one hundred fifty, which is the number of the Psalms, she called it a psalter; and because it is composed of Hail Mary’s, the salutation of the Archangel Gabriel to Mary, she called it angelic. Deeply comforted by this visit from the Mother of God, St. Dominic applied himself fervently to the spreading of this devotion, and was thus able to wipe out the heresy.

Such vigorous words from the Holy Father should make us reflect on the eminence held by this Marian devotion in the heart of the Church. That is why we must grow in devotion to the Holy Rosary, to promoting it and making it loved with the deep conviction that it is a most powerful aid, and even more, “the most fitting and efficacious way to obtain the maternal aid of the Virgin Mary, as can be seen from its more heavenly than human origin” (Pius XII).The Holy Rosary, over the centuries, has come to be the favorite prayer of Marian hearts, true children of the Church: the prayer of the poor and of the rich, of the simple, the wise, and the saints. “The Rosary is my favorite prayer… For against the background of the words of the ‘Hail Mary,’ the principal episodes of the life of Jesus Christ pass before the eyes of the soul. Together they… put us in living communion with Jesus through – we might say – the Heart of His Mother. At the same time, during these decades of the Rosary our heart is filled with all the events that make up the life of the individual, the family, the nation, the Church, and of humanity; with our personal actions and the actions of our neighbors and, especially, of those who are closest to us, who are most in our hearts. In this way the simple prayer of the Rosary beats with the rhythm of human life” (John Paul II, Oct. 29, 1978).

Let us give heed to the words of the immortal Blessed Pius IX, the Pope of the Immaculate Conception, addressed to the prelates who were assisting him at his deathbed: “The Rosary is a compendium of the Gospel, and will bestow on those who pray it those rivers of peace of which Scripture speaks; it is the most beautiful devotion, the richest in grace, and most pleasing to the heart of Mary. May this, my sons, be my testament by which you remember me on earth.”

Let us resolve, then, to be fervently dedicated to the praying and propagation of the Holy Rosary; let us pledge today, if we have not already done so, to pray it every day of our life! — either in its commonly known form, or in the form of the Seven Sorrows of Mary Most Holy, the Rosary of the Mater Dolorosa, for which Miles Christi has received from the Church the same indulgences.