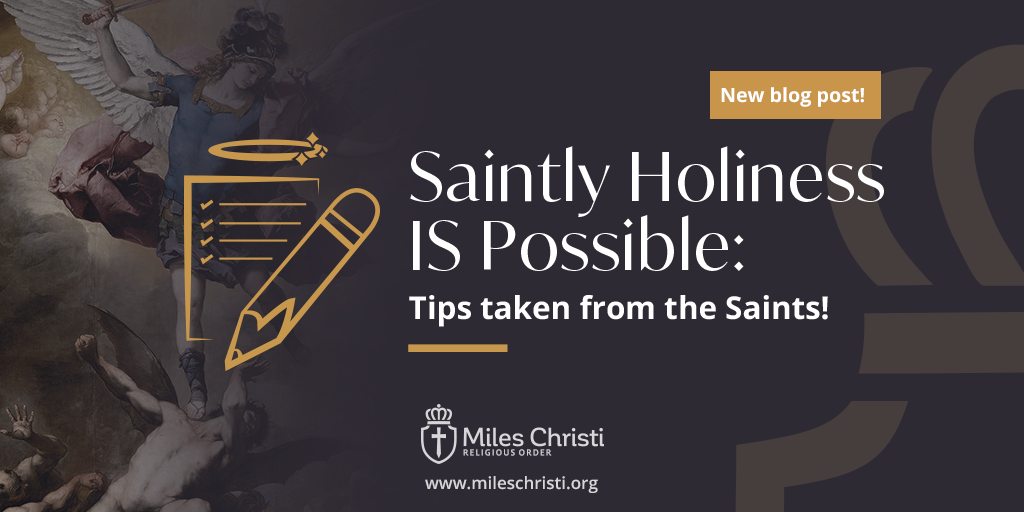 Our Holy Mother Church gives Saint Michael the Archangel the highest place among the angels as she calls him “Prince of the heavenly host”.

Saint Michael manifested his strength and power in fighting the great battle in heaven against Lucifer and the unfaithful angels. His zeal and fidelity to God encouraged a part of the heavenly court to remain faithful and obedient. St. Michael’s strength inspired bravery in the loyal angels who joined his cry of nobility, “Who is like God?”, as they defeated Lucifer and his rebellious followers.

St. Michael is represented in art as the warrior angel, the conqueror of Lucifer, putting his heel on the head of the infernal enemy, threatening him with his sword, piercing him with his spear, or ready to chain him forever in the abyss of hell. He is traditionally recognized as the guardian of Christian armies against the enemies of the Church and as the protector of Christians against diabolical powers.

There is an account of a young United States Marine named Michael who prayed to St. Michael every morning: “Michael, Michael of the morning, fresh corps of Heaven adorning, keep me safe today, and in time of temptation drive the devil away. Amen.” In 1950, while Michael was in the hospital after having been wounded in Korea, he wrote a letter to his mother.

Navy Chaplain Father Walter Muldy received a copy of the letter, spoke personally with the marine and the sergeant involved in the incident, and concluded that what was written in the letter was absolutely true.  In 1951, Fr. Muldly read the letter in public to a gathering of 5,000 Marines at the Naval Base in San Diego, California:

I wouldn’t dare write this letter to anyone but you because no one else would believe it. Maybe even you will find it hard but I have got to tell somebody. First off, I am in a hospital. Now don’t worry, you hear me, don’t worry. I was wounded but I’m okay you understand? Okay. The doctor says that I will be up and around in a month.

But that’s not what I want to tell you.

When I got to Korea, I prayed even harder. Remember the prayer that you taught me? “Michael, Michael of the morning, fresh chord of Heaven adorning,” you know the rest of it. Well I said it every day. Sometimes when I was marching or sometimes resting. But always before I went to sleep. I even got some of the other fellas to say it.

Well, one day I was with an advance detail way up over the front lines. We were scouting for the Commies. I was plodding along in the bitter cold, my breath was like cigar smoke.

I thought I knew every guy in the patrol, when along side of me comes another Marine I never met before. He was bigger than any other Marine I’d ever seen. He must have been 6’4” and built in proportion. It gave me a feeling of security to have such a body near.

Anyway, there we were trudging along. The rest of the patrol spread out. Just to start conversation I said, “Cold ain’t it.” And then I laughed. Here I was with a good chance of getting killed any minute and I am talking about the weather.

My companion seemed to understand. I heard him laugh softly.

I looked at him, “I have never seen you before, I thought I knew every man in the outfit.”

“I just joined at the last minute”, he replied. “The name is Michael.”

“I know,” he said and then went on, “Michael, Michael of the morning …”

I was too amazed to say anything for a minute. How did he know my name, and a prayer that you had taught me? Then I smiled to myself, every guy in the outfit knew about me. Hadn’t I taught the prayer to anybody who would listen. Why now and then, they even referred to me as St. Michael.

Neither of us spoke for a time and then he broke the silence. “We are going to have some trouble up ahead.”

He must have been in fine physical shape or he was breathing so lightly I couldn’t see his breath. Mine poured out in great clouds. There was no smile on his face now. Trouble ahead, I thought to myself, well with the Commies all around us, that is no great revelation.

Snow began to fall in great thick globs. In a brief moment the whole countryside was blotted out. And I was marching in a white fog of sticky particles. My companion disappeared.

“Michael,” I shouted in sudden alarm.

I felt his hand on my arm, his voice was rich and strong, “This will stop shortly.”

His prophecy proved to be correct. In a few minutes the snow stopped as abruptly as it had begun. The sun was a hard-shining disc. I looked back for the rest of the patrol, there was no one in sight. We lost them in that heavy fall of snow. I looked ahead as we came over a little rise.

Mom, my heart stopped. There were seven of them. Seven Commies in their padded pants and jackets and their funny hats. Only there wasn’t anything funny about them now. Seven rifles were aimed at us.

“Down Michael,” I screamed and hit the frozen earth.

I heard those rifles fire almost as one. I heard the bullets. There was Michael still standing. Mom, those guys couldn’t have missed, not at that range. I expected to see him literally blown to bits.

But there he stood, making no effort to fire himself. He was paralyzed with fear. It happens sometimes, Mom, even to the bravest. He was like a bird fascinated by a snake.

At least, that was what I thought then. I jumped up to pull him down and that was when I got mine I felt a sudden flame in my chest. I often wondered what it felt like to be hit, now I know…

I remember feeling strong arms around me, arms that laid me ever so gently on a pillow of snow. I opened my eyes, for one last look. I was dying. Maybe I was even dead, I remember thinking, well, this is not so bad.

Maybe I was looking into the sun. Maybe I was in shock. But it seemed I saw Michael standing erect again only this time his face was shining with a terrible splendor.

As I say, maybe it was the sun in my eyes, but he seemed to change as I watched him. He grew bigger, his arms stretched out wide, maybe it was the snow falling again, but there was a brightness around him like the wings of an angel. In his hands was a sword. A sword that flashed with a million lights.

Well, that is the last thing I remember until the rest of the fellas came up and found me. I do not know how much time had passed. Now and then I had but a moment’s rest from the pain and fever. I remember telling them of the enemy just ahead.

“Where is Michael,” I asked.

I saw them look at one another. “Where’s who?” asked one.

“Michael, Michael the big Marine I was walking with just before the snow squall hit us.”

“Kid,” said the sergeant, “You weren’t walking with anyone. I had my eyes on you the whole time. You were getting too far out. I was just going to call you in when you disappeared in the snow.”

He looked at me, curiously. “How did you do it kid?”

“How’d I do what?” I asked half angry despite my wound. “This marine named Michael and I were just …”

“Son,” said the sergeant kindly, “I picked out this outfit myself and there just ain’t another Michael in it. You are the only Mike in it.

He paused for a minute, “Just how did you do it kid? We heard shots. There hasn’t been a shot fired from your rifle. And there isn’t a bit of lead in them seven bodies over the hill there.”

I didn’t say anything, what could I say. I could only look open-mouthed with amazement.

It was then the sergeant spoke again, “Kid,” he said gently, “every one of those seven Commies was killed by a sword stroke.”

Satan trembles when he hears St. Michael’s name. It reminds him of the cry of noble protest that this great Archangel made against him. The very name of Michael invites us to honor him, as it is a cry of enthusiasm and fidelity. It means “Who is like God?”