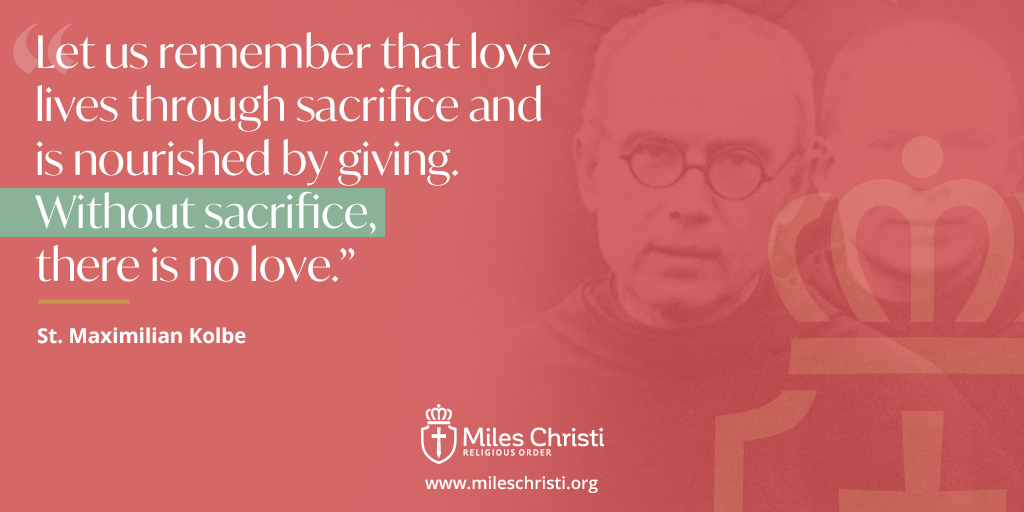 The good thing about the saints is that they were people made of flesh and bones, just like us, and they could reach a level of heroic virtue.

Fast conclusion: We All Can Be Saints.

Of course, there are many aspects to the saints’ lives that we can admire rather than imitate because they were acting in specific circumstances; following God’s will and counting on particular graces. However, there is always something to imitate from the saints. Something that we can adapt to our times and place.

Today we want to reflect briefly about the life of Saint Maximilian Mary Kolbe, a martyr. Giving up his life in a concentration camp for others as his last act of his life, is not something we will probably imitate.  A martyr is not a person that had the courage to give his life in one instant, without preparation.  The supremely generous act of giving one’s own life is the crowning of a chain of little good deeds, here and there, throughout life.  You need to be dead to self, detached from the world, and possess a very strong love of God, to be able to make that brave and definitive sacrifice.

Let’s try to imagine that glorious day in the Auschwitz concentration camp, in August 1941. The inhuman rule was that if one person escaped the camp, then ten more should be executed. That was what happened that day. The soldier started with a horrendous lottery to pick the ten who would pay with their lives. One of them, a 40-year-old Polish sergeant named Franciszek Gajowniczek, said with fear and sadness, “I lost my wife, if I die my children will be orphans.” Father Maximilian Kolbe was close enough to hear him. Moved by the grace of God, Fr. Kolbe offered himself in place of Gajowniczek saying, “I don’t have anyone, I’m a catholic priest.”

The way of dying was by starvation! Let’s try to imagine this simple man, just like us, offering himself to die by starvation, without more reason than his ardent charity! This is not possible without inspiration and assistance from God. The Lord said: “No one has greater love than this, to lay down one’s life for one’s friends.” (Jn 15:13) But in this case Saint Maximilian didn’t even know the person for whom he was dying!

In a world full of selfishness and individualism, let us have the courage to love our neighbors until it hurts.  We will be following the impressive example of Saint Maximilian. Perhaps the Lord is not going to ask us to give our blood for Him, but our life is full of opportunities for little martyrdoms serving others.

Let us ask St. Maximilian, this great catholic priest of God, through his intercession to our Lady to grant us the virtues that we need the most.

St. Maximilian Kolbe, pray for us!