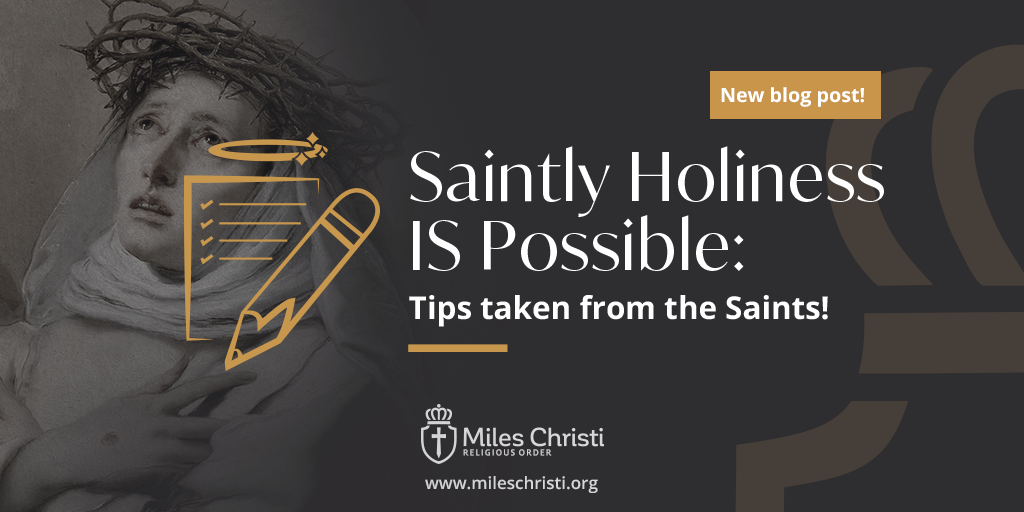 Today we celebrate the Feast Day of St. Catherine of Siena, a 12th century saint whose courage transcends millennia after millennia to inspire time and again a new generation of souls who aspire for saintly holiness and greatness.

One of the most highly recognized quotes of St. Catherine is: “Be who God made you to be and you will set the world on fire!” This is indeed a great, inspiring quote that should be noted and reflected upon. However, I would like to draw attention to a lesser known quote: “Father, I am hungry; for the love of God give this soul her food, her Lord in the Eucharist.” It was the Holy Eucharist which sustained St. Catherine – her entire existence burned with a Eucharistic love. She had a Eucharistic encounter. We, too, must have this Eucharistic encounter in order to become saints and to live lives free from sin.

St. Pope John Paul, II once said that the Eucharist is “the secret to his day.” One commonality amongst all of the saints, like St. Pope John Paul and St. Catherine of Siena, was a burning desire to love God and to make His love known. The saints, all created uniquely and in God’s image (like us), sought out to make His love known in their respective communities, parishes, families, schools and workplaces. For the saint, every moment is the right moment because they are living in the Holy Will of God. But in order to live in perfect unity with God, in order to cultivate a personal relationship with all three Persons of the Holy Trinity, we must receive the Holy Eucharist daily, or as frequently as we can, as it is our soul’s strength. We should also visit our Lord in the Blessed Sacrament for at least one hour a week, more frequently the busier we become. Why is this?

It’s simple, really… In order to grow physically, we work out. Same thing on the spiritual level – working out on the spiritual level requires spiritual exercises like daily Mass, Eucharistic Adoration, retreats and developing a strong faith community. All of this helps us in developing our personal relationship with Jesus Christ. It was not common practice to receive daily Holy Communion back in St. Catherine’s days. Regardless, she petitioned her bishop to not only receive daily Holy Communion, but she also petitioned and eventually was able to have her very own tabernacle in her own house! Talk about determination! Not all of us can have tabernacles in our homes, I know. But all of us can try to receive Holy Communion daily so that we become those Living Tabernacles for Jesus!

And what a grace and sacred blessing for us as Catholics is that we get to take a personal relationship with Jesus a step further by receiving Him physically in the Holy Eucharist. We then become, as St. Teresa of Calcutta said, “living tabernacles” able to witness more deeply and fully to the Gospel and Jesus Christ. We must, like St. Catherine of Siena did, bring people to Jesus, even if that means that one day, we need to bring his message to a deacon, religious, priest, bishop or even a pope! We must be so docile to God’s will that we are ready to courageously go anywhere and to anyone for Him, just like St. Catherine did. But we must first have a Eucharistic awakening so that we know who we are in Christ (our true identity) and Whose we are.

To those reading this, I would challenge you to go to Daily Mass, and while doing so, ask our Lord to inspire within you a Eucharistic Awakening to burn inside of you – the same one that He gave St. Catherine of Siena. Our world needs Jesus in the Holy Eucharist. Together, let us ask Him to give us the same graces of COURAGE, DETERMINATION and SAINTLY FOCUS that He gave St. Catherine of Siena to bring people to Him in this way. And let us ask this great, heroic saint to intercede for us while we do!

PS: Here are some cool, exciting fun facts about St. Catherine of Siena: