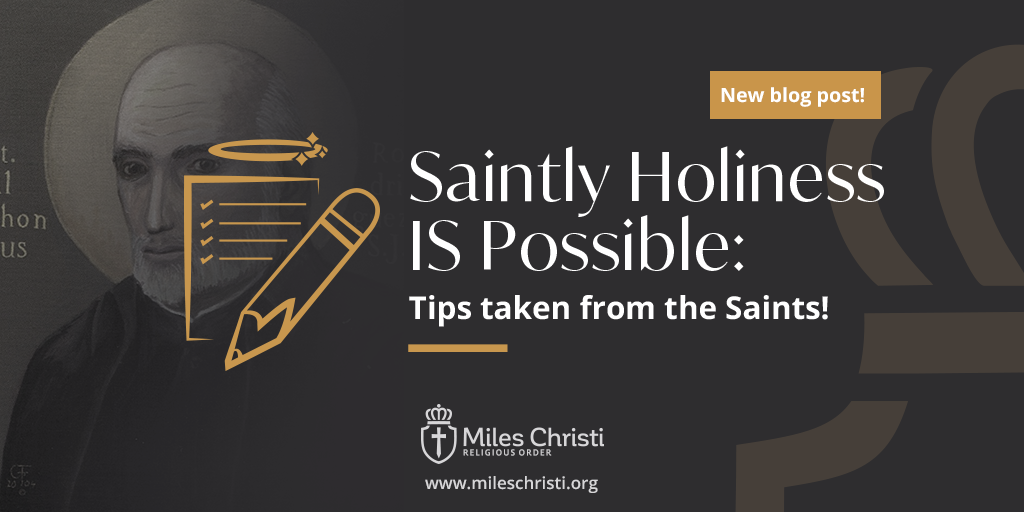 Have you ever heard the word “Coadjutor Brother” or “lay Brother?” Probably not! That is because a “Coadjutor Brother” or a “lay Brother” is special vocation within the Church. It is uncommon enough that it often looks a bit odd or strange to some people. Some may even erroneously think “it’s for those who didn’t make it to the Priesthood” or “it’s for those religious unable to study theology.” However, that is definitely not the case. In fact, it is a beautiful way of consecration of oneself completely to God.

Today I want to share with you the life of St. Alphonsus Rodriguez, patron of model of the Coadjutor Brothers of Miles Christi. I hope that by looking at his life you can get a better idea of the consecration of a Coadjutor Brother.

St. Alphonsus was born in 1531 in Segovia, Spain. He was the second boy and had eleven siblings.

When he was 10 years old, he met two Jesuit priests who came to preach to his town. One of them was St. Peter Favre—one of the first companions of St. Ignatius of Loyola. Alphonsus will always fondly recall that meeting with them as very important to his future vocation.

Years later, Alphonsus was sent to study at the newly-opened Jesuit College in Alcalá. When he was 26 he married María Juárez. Together they had three children. Although he struggled economically, Alphonsus was a happy man and gave thanks to God for the gift of his family.

However, pain and suffering soon interrupted his life. In the course of four short years, his wife and children all died. Soon after this tragedy, his mother died as well. For Alphonsus, this was all a terrible cross for him to carry. But Alphonsus was a man of faith, and in the midst of suffering he turned towards God in prayer.  Seeking God’s will, Alphonsus was able to see the events in a new way—in a supernatural way. “What does God want me to do now? What is His will for me now? What should I do with my life?” Those questions were stamped with the seal of faith! From the great depths of devastation and suffering, God was going to bring about a great saint!

After some time of discernment, Alphonsus sees that God is calling him to be a Coadjutor Brother in the Society of Jesus. At the age of 38 he went to the Jesuit College of Valencia to ask for admission. However, during his first years at the Jesuit College, Alphonsus had to face several difficulties, trials, doubts and interior crosses. But Our Lord consoled him telling him, “It´s enough that I wish you become a Brother.”

St. Alphonsus was soon transferred to the Jesuit House in Mallorca, Spain, where he spent the rest of his life to his death in 1617.

We can highlight different aspects of his life as a Brother. First his intense life of prayer. Alphonsus spent hours in front of the Blessed Sacrament. His great love for the Eucharist led him to altar serve as many Masses as his responsibilities allowed him to do. Priests would entrust their problems and intentions to his prayers. He was truly a “contemplative in action.” So much so that his Superior told him to pray less time so as to ease his mind! Alphonsus humbly tried to obey his Superior, but then said, “Father, as hard as I try to pray less time, I can’t stop thinking about God.”

Another aspect of the great and abiding faith of Alphonsus was his deep love and devotion to Mary. Mary appeared to him many times to console him during his life. Once, as he walked by an image of Our Blessed Mother, he said, “I love you more than you love me,” and as he kept walking he heard Her reply, “No, I love you more.” That is only one of many extraordinary events in the course of his life. At another time his prayers were enough to stop a great storm that threatened the island. But most important of all, he prayed intensely for the conversion of souls. That was his great desire: to save souls for Christ.

Another important aspect is his life of hidden work and humility. This great saint who performed miracles, who had ecstasies during Mass and received Mary’s apparitions, lived a life of simplicity and humility. He was the porter of the Religious House for most of his life. He would do the most humble chores, but he would find God in those small acts. As a porter he would say to himself, “When summoned to the gate, act as though your God was coming in; open the door for Him, and receive Him. And if you are sent with a message, act as though it is God, not man, who sends you; and as it is God´s business, you will dispatch it at once, with all joy and affection, as so good a Lord deserves, always inclining your will to His.” While peeling potatoes he would reflect, “Peeling potatoes looks like a ridiculous thing. But why am I doing this, Blessed Mother? For the love of Jesus and for the salvation of the souls.”

That was the key to his sanctification: he would be a contemplative in action. He would see God´s will in every action and chore. He never stopped praying while working.

Let us imitate this great saint in his deep life of prayer and in offering all our actions for the glory of God and salvation of souls!