“Do not be afraid to go against the current!” 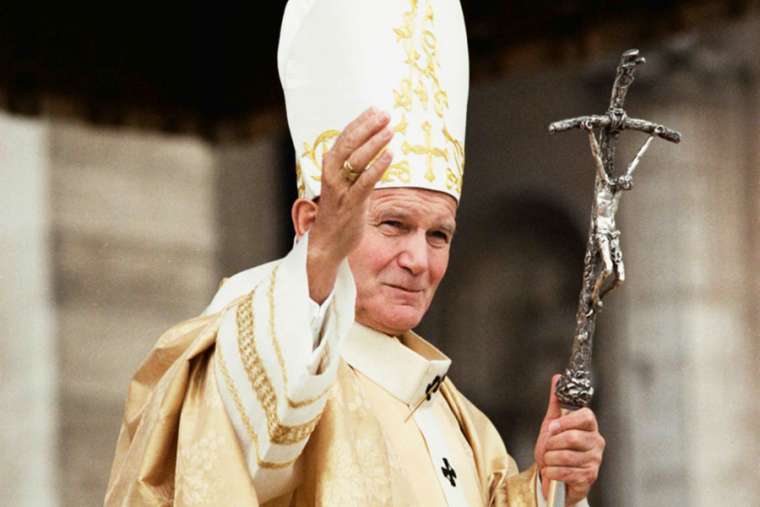 In April 2004, Pope St. John Paul II made a Palm Sunday plea to youth to go fearlessly “against the current” in proclaiming the Cross of Christ, the redeeming salvation for mankind.  Addressing some 30,000 pilgrims gathered in St. Peter’s Square, the Pope and now Saint began Holy Week by presiding over a long Palm Sunday Mass which was also World Youth Day.

The ceremony began with the procession of palm and olive branches, and continued with the full reading of the Passion of Jesus Christ.  The Pope dedicated his homily to explaining, especially to his young listeners, the central mystery of Christianity: the Cross.  “Jesus died on the Cross for each one of us,” he said.  “The Cross is, therefore, the greatest and most eloquent sign of His merciful love, the only sign of salvation for every generation and for the whole of humanity.”

The celebration also marked the 20th anniversary of the day the Pope entrusted a cross to young people in Rome, giving birth to World Youth Day.  “Some twenty years ago now, at the end of the Holy Year of the Redemption, I entrusted the Jubilee cross to young people. On that occasion, I exhorted them to be faithful disciples of Christ, the crucified King.

“Since then, the cross has continued to go across numerous countries, in preparation for World Youth Days. During its pilgrimage, it has traveled across the continents. Like a torch passed from hand to hand, it has been taken from country to country; it has become the luminous sign of the trust that animates the young generations of the third millennium.

“Dear young people! While celebrating the 20th anniversary of the beginning of this extraordinary spiritual adventure [World Youth Day], let that same charge renew you: To you I entrust the cross of Christ! Carry it in the world as the sign of the love of the Lord Jesus for humanity, and proclaim to all that only in Christ, dead and risen, is there salvation and redemption.

“Certainly the message that the Cross communicates,” the Holy Father continued in a clear voice, “is not easy to understand in our time, in which material well-being and comfort are proposed and sought as the most important values.  But you, dear young people, do not be afraid to proclaim the Gospel of the Cross in every circumstance.  Do not be afraid to go against the current!” he exhorted.

Let us not be afraid to draw strength from this Pope and Saint’s words and boldly proclaim the Cross of Christ!